Seminar: Final Descent: An Animated Trip to the Underworld 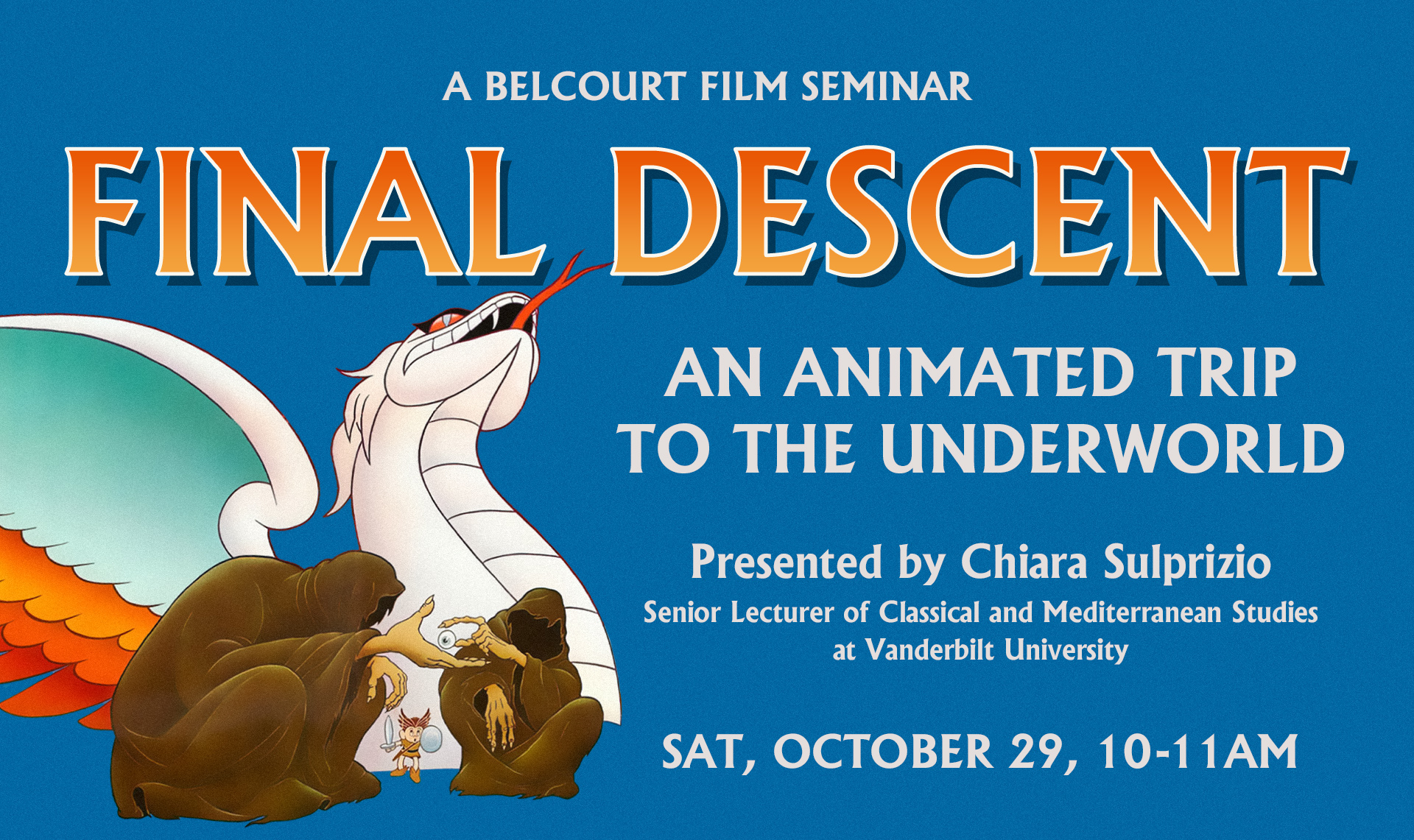 The underworld, or the realm of the dead, has been a constant source of fear, fascination and inspiration to poets and artists from ancient Greece and Rome up to the modern day. Homer and Vergil produced the earliest descriptions we have of Hades’ dark landscape and of its odd and often terrifying inhabitants, while Dante vividly elaborated on these in his own vision of hell (or inferno) in the Divine Comedy. Visual artists of all kinds, including those working in the sphere of animation, have also been drawn to the creative challenge of representing the land of Charon, Cerberus, the Styx, and to retelling the myths of those who have descended to its gloomy depths.

In this seminar, presented in conjunction with multimedia artist Cybelle Elena’s immersive exhibit Beaches of Purgatory at the COOP Gallery in Nashville, we will explore animated depictions of the underworld, and of the myths associated with this forbidding realm, in all their weird and wonderful variety. We will look at the inventive approaches animators from all over the world have taken to imagining where we go after we die, and to portraying the stories of famed figures like Demeter and Persephone, Orpheus and Eurydice, and the legendary Hercules, whose lives were forever changed by their encounter with this dreadful yet dazzling domain.

About the speaker:
Chiara Sulprizio is a Senior Lecturer in the Program in Classical and Mediterranean Studies at Vanderbilt University. She has also taught at Loyola Marymount University, Hamilton College and the University of Southern California, where she received her PhD. Her scholarly work examines ancient attitudes and ideas about gender and sexuality, especially as they are depicted in comedy, satire and other humor-based literary genres.

These interests are explored extensively in her recent book, Gender and Sexuality in Juvenal’s Rome: Satire 2 and Satire 6 (Oklahoma University Press, 2020), which offers a fresh translation of two of Juvenal’s most provocative poems, accompanied by notes and an introduction geared toward undergraduates and those just beginning their study of this challenging ancient author.

She is also interested in the reception of the Classical past in modern comics, graphic novels and animation, and she is the creator of the web archive “Animated Antiquity: Cartoon Representations of Ancient Greece and Rome” (www.animatedantiquity.com).

She regularly teaches courses on ancient tragedy and comedy, ancient sexuality and gender, Homer and the Trojan War, and Greek mythology for the program. She also teaches Latin at all levels and she leads the Maymester course in Rome, “History and Art of Ancient Rome.”