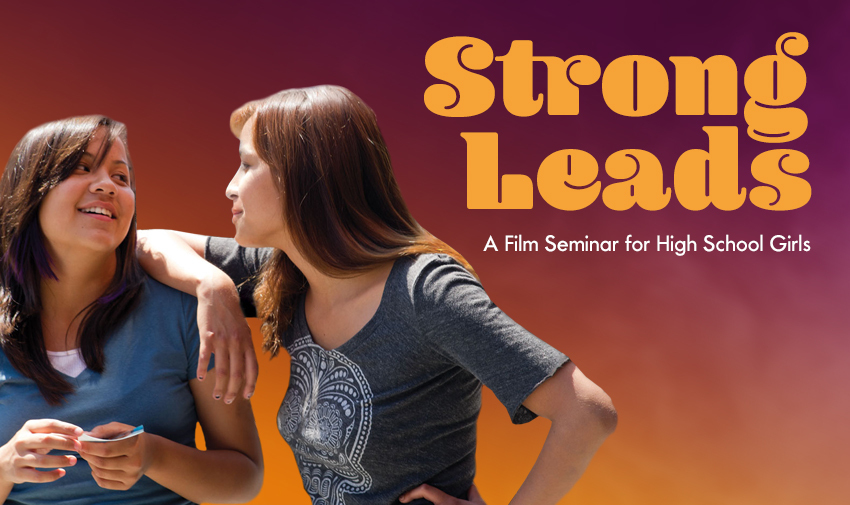 Strong Leads: A Film Seminar for High School Girls is an after-school program spotlighting films by and about women. It is designed for 10th, 11th and 12th girls of all identities. A presentation of the Belcourt’s education and engagement program, Strong Leads explores gender representation in cinema, in the Hollywood establishment, and in film discourse.

Students will watch films on their own and meet virtually on Mondays, October 26 to November 23, 4-5pm, to discuss with their peers.

All films are available to stream for free on Tubitv.com.

This series features high-quality films designed to spark conversation about important issues. Because of that, some films contain adult situations, profanity, drug/alcohol use, nudity, sexual situations, and violence.

Facilitated by Allison Inman, the Belcourt’s education and engagement director.

Participation in Strong Leads is by application only. Applications are due October 21, and applicants will be confirmed and notified on October 23. The seminar will be held virtually. Students will receive call-in information each week.

HALF THE PICTURE
First-time director Amy Adrion’s HALF THE PICTURE celebrates the groundbreaking work of female filmmakers and investigates systemic discrimination that has for decades denied opportunities to far too many talented women in Hollywood. Gender-parity experts and academics discuss Hollywood’s dismal employment practices, and these conversations are woven between interviews with prominent women directors (including Jamie Babbit, Gina Prince-Bythewood, Kasi Lemmons, Catherine Hardwicke, Miranda July, Penelope Spheeris, Ava DuVernay, and many others), telling their stories of breaking into a male-centered business. They confirm the double standards that still exist while eloquently outlining their career paths, their struggles, and their hopes for the future.

I AM NOT A WITCH
The acclaimed debut feature from Rungano Nyoni is a daring, sharply satiric feminist fairy tale set in present-day Zambia. When nine-year-old orphan Shula (Margaret Mulubwa) is accused of witchcraft, she is exiled to a witch camp run by a corrupt and inept government official. Tied to the ground and told that she will turn into a goat if she tries to escape, Shula becomes a star tourist attraction exploited by those around her for financial gain. Soon she is forced to make a difficult decision: resign herself to life at the camp, or risk everything for freedom. Winner of a BAFTA award for outstanding debut, I AM NOT A WITCH is a visually imaginative, socially incisive commentary on the clash between tradition and modernity from one of contemporary cinema’s most exciting new voices.

MOSQUITA Y MARI
Aurora Guerrero’s debut feature focuses on two Chicana high schoolers, Mari (Venecia Troncoso) and Yolanda (Fenessa Pineda) against a backdrop of Southeast Los Angeles. Lost in their private world of unspoken affection, lingering gazes, and heart-felt confessions of uncertain futures, Yolanda’s grades slip while Mari’s focus drifts from her duties at a new job. Mounting pressures at home collide with their new-found connection, forcing them to choose between their obligations to others and staying true to themselves.

STORIES WE TELL
In her inspired, genre-twisting and deeply personal maiden voyage into documentary, Oscar-nominated writer/director Sarah Polley (AWAY FROM HER) investigates the secrets kept within a family of storytellers—her own family. She playfully interviews and interrogates her “cast of characters,” eliciting refreshingly candid (and mostly contradictory) answers to the same questions. Her characters relate their versions of the family mythology, and present-day recollections shift into nostalgia-tinged glimpses of their mother, who departed too soon and left a trail of unanswered questions. Polley unravels the paradoxes to reveal the essence of family: always complicated, warmly messy and fiercely loving. STORIES WE TELL is a deeply personal film about how our narratives shape and define us as individuals and families, all interconnecting to paint a profound, funny and poignant picture of the larger human story.

IN BETWEEN
In Maysaloun Hamoud’s debut feature, three Palestinian women share an apartment in the heart of Tel Aviv. Lalia, a criminal lawyer with a wicked wit, burns off her workday stress in the underground club scene and begins a new relationship with a modern Muslim man. Salma, slightly more subdued, is a DJ and bartender who struggles with the notion of coming out to her Christian family. When Nur, a younger, religious Muslim girl moves into the apartment to study at the university, the increasingly secular nature of her life clashes with her conservative fiancé, who wants her to leave Tel Aviv and assume her rightful role as a wife. These three very different women find themselves doing the same balancing act between tradition and modernity, citizenship and culture, and fealty and freedom.