Seminar: Re(el)-locating Shakespeare — Or the Untimely Bard of Cinema 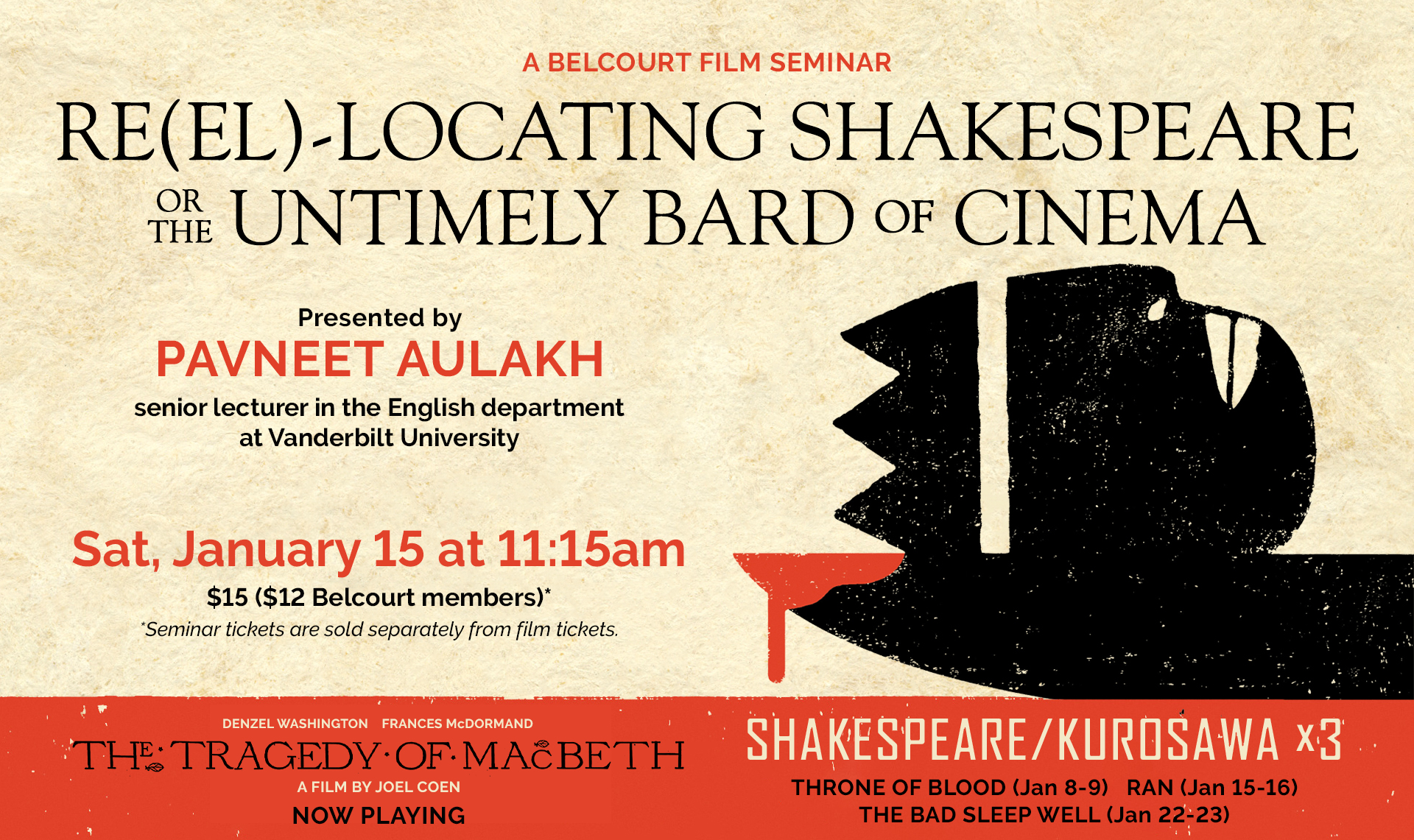 When Ben Jonson, Shakespeare’s more classically scrupulous contemporary, eulogized his rival and friend as being “not of an age, but for all time,” he could not have imagined how far Shakespeare would travel over both future centuries and mediums (television, film, the graphic novel). From relocating Macbeth from the misty moors of Scotland to rural Pennsylvania and Mumbai, the Arden of As You Like It to the forests of 19th-century Japan, and Hamlet’s Denmark to corporate New York, a tradition of reimagining Shakespeare’s plays in cinematic form traces back to the origins of film.

Sampling from this rich tradition, this seminar will explore the dynamics of translating plays from the stage and page to the screen — and from the worlds Shakespeare imagined to those that have been realized in film. Hearing 17th-century English spoken in the Venice Beach of Baz Luhrmann’s Romeo and Juliet or seeing motorcycles mingle with togas in Julie Taymor’s Titus Andronicus can be jarring. But, how might we think of them in relation to Shakespeare’s own approaches to adaptation and history? And, given his role in the British imperial project, how might we understand Shakespeare’s appropriation in post-colonial cinema?

About the speaker:
Pavneet Aulakh received his Ph.D. in English from the University of California, Santa Barbara (UCSB) and an M.A. in Creative Writing from Boston University, where he studied poetry. Before joining Vanderbilt University’s English department, he was the Literature Fellow at UCSB’s College of Creative Studies, at which he taught courses on Shakespeare, Chaucer, and the subject of curiosity in the literature and experimental philosophy of the Renaissance. In addition to his concentration on the literature of early modern England, his research and teaching interests include: the history and philosophy of science, particularly as it pertains to interconnections between the imaginative and proto-scientific literature of the 17th century; the history of the book; aesthetics and poetics; early modern and contemporary philosophy; and medieval literature.

Aulakh’s book project, Beyond Words: The Senuous Turn in Jacobean England, draws on the history of science, early modern theorizations of the period’s inherited rhetorical tradition, and the history of material texts to reconsider the relationship between 17th century natural philosophy and imaginative literature. Instead of positioning these fields in opposition, Aulakh’s work advances an appreciation for the sensuous poetics and representational strategies shared by proto-scientific and imaginative literatures by focusing on Francis Bacon and a network of literary contemporaries whose careers and writings intersected — including George Herbert, John Donne and Margaret Cavendish. These intersections illustrate not only the influence Bacon on his literary peers, but also the vital role of poesis and the imagination, particularly as an image-maker, in the performance of the new science.